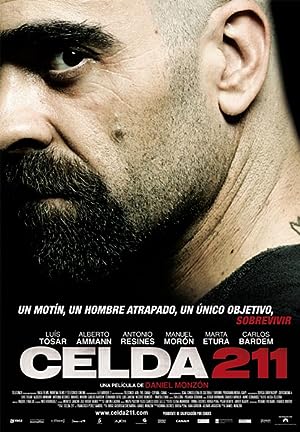 Juan Oliver wants to make a good impression at his new job as a prison officer and reports to work a day early, leaving his pregnant wife, Elena, at home. His destiny is forever changed by this fateful decision, as during his tour of the prison, an accident occurs that knocks him unconscious. He is rushed to the empty but visibly haunted walls of cell 211. As this diversion unfolds, inmates of the high-security cell block strategically break free and hijack the penitentiary.

Aware of the violence that is to come, the prison officers flee, leaving Juan stranded and unconscious in the heart of the riot. When Juan awakens, he immediately takes stock of the situation; in order to survive, he must pretend to be a prisoner. Juan develops a dialogue with the violent leader of the riot, Badass, and the two begin a partnership, Badass fully believing that Juan is a new inmate. Negotiations go smoothly until the rioters take three ETA (the militant Basque separatist organization) prisoners’ hostage. When this hits the news, it triggers a stream of prison riots throughout the country as well as demonstrations in the Basque Country. Juan quickly realizes that he is on his own as the situation becomes more politicized and the government gets involved, afraid of potential ramifications in the Basque community. As the drama heightens, unexpected shifts in character both within and without the prison occur.

Concerning a rookie guard who must pose as a prisoner once a full-scale riot breaks out, Cell 211 is an absolute gem.

Fiercely tense with a cracking pace, an edgy sense of urgency, and some ugly scenes of brutality, it’s also got some great and believable performances as well as some rather poignant scenes, as bonds are made between prisoners and our protagonist gets to see things from their perspective.

Yet the last thing is Cell 211 is generic. It has some refreshingly genuine left-field unexpected twists and developments that keep you pretty much hooked, from its attention-grabbing opening scene to its blistering conclusion. It also does a great job of keeping you in suspense as to whether or not our protagonist will be discovered, with the viewer left under no illusions what will happen to him if he is.

It’s also got some very decent production values and mercifully refrains from that awful jump-cut editing during the more chaotic prison scenes.

But best of all is its sheer unpredictability as trust me- after the hour mark, you really won’t be sure how things are gonna turn out and will be hooked all the more.

Overall, a great film and highly highly recommended. See it now, you’ll be glad you did. 9/10, Sheer class from Spain.