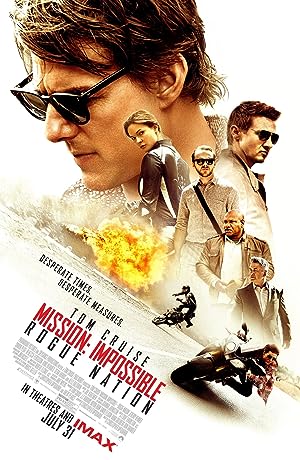 Mission: Impossible - Rogue Nation (2015)
131 min|Action, Adventure, Thriller|31 Jul 2015
7.4Rating: 7.4 / 10 from 363,992 users
Ethan and his team take on their most impossible mission yet when they have to eradicate an international rogue organization as highly skilled as they are and committed to destroying the IMF.
Director: Christopher McQuarrie
Creator: Bruce Geller, Christopher McQuarrie, Drew Pearce
Actors: Tom Cruise, Rebecca Ferguson, Jeremy Renner

Filming began on August 21, 2014, in Vienna, Austria, and concluded on March 12, 2015. The film released in North America by Paramount Pictures on July 31, 2015. It received positive reviews from critics and grossed $682 million worldwide, becoming the eighth-highest-grossing film of 2015 as well as the third highest-grossing film starring Cruise.

A sequel, Mission: Impossible – Fallout, released on July 27, 2018, with McQuarrie returning as writer and director.