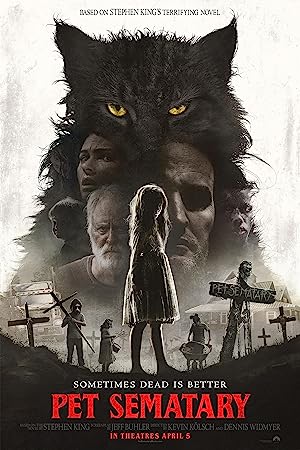 Pet Sematary 2019 American supernatural horror film directed by Kevin Kölsch and Dennis Widmyer and written by Jeff Buhler, from a screen story by Matt Greenberg. It the second adaptation of the 1983 novel of the same name by Stephen King, after the 1989 film. The film stars Jason Clarke, Amy Seimetz, and John Lithgow, and follows a family that discovers a mysterious graveyard in the woods behind their new home.

Talks for a new adaptation of Pet Sematary began in March 2010, with Greenberg initially writing the screenplay. Lorenzo di Bonaventura and Steven Schneider were revealed to be producing the remake with Juan Carlos Fresnadillo in talks to direct it. By December 2017, Paramount Pictures had greenlit the new version of King’s novel, with duo filmmakers Kölsch and Widmyer directing. Principal photography commenced on June 18, 2018, in Montreal, Quebec, Canada, and wrapped on August 11, 2018.

The film premiered at South by Southwest festival on March 16, 2019, and theatrically released in the United States on April 5, 2019. It received mixed reviews from critics, who praised the dark tone, atmosphere, and performances, but disliked the slow pacing and reliance on jump scares. Critics and audiences were both divided on the changes between the film and book, though many named it better than the 1989 adaptation.