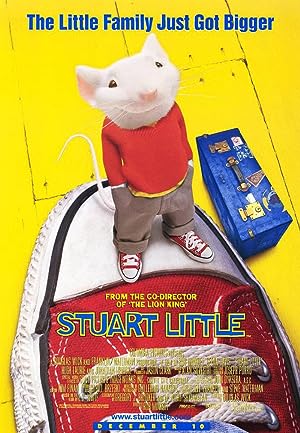 Stuart Little 1999 American family comedy film loosely based on the novel of the same name by E. B. White. Directed by Rob Minkoff in his live-action debut, the screenplay written by M. Night Shyamalan and Greg Brooker, and stars Geena Davis, Hugh Laurie, and Jonathan Lipnicki, alongside the voices of Michael J. Fox and Nathan Lane. The plot bears little resemblance to that of the book, as only some of the characters and a few minor plot elements are the same. The film’s sequel more closely resembles the original novel.

The film was released on December 17, 1999, by Columbia Pictures. It received an Academy Award for Best Visual Effects nomination, losing to The Matrix. The first film in the Stuart Little series, followed by a sequel, Stuart Little 2 in 2002, the short-lived television series Stuart Little in 2003, and another sequel in 2005, the direct-to-video Stuart Little 3: Call of the Wild. It was Estelle Getty’s final film before her retirement in 2001 and her death in 2008.