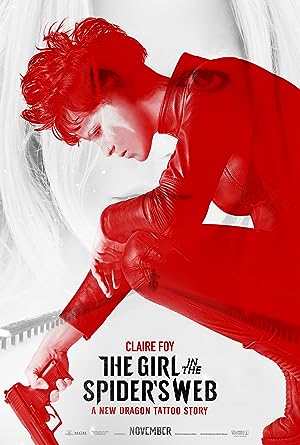 The Girl in the Spider’s Web 2018 action thriller film directed by Fede Álvarez and written by Álvarez, Steven Knight, and Jay Basu, based on the novel of the same name by David Lagercrantz, which in turn is based on characters in the book series by Stieg Larsson. The film acts as both a soft-reboot and a sequel to David Fincher’s The Girl with the Dragon Tattoo, as the second installment in the American-produced Millennium film series. It stars Claire Foy, taking over the role of Lisbeth Salander from Rooney Mara, and follows Salander as she tries to rescue and exact vengeance for battered women. Sverrir Gudnason, LaKeith Stanfield, Sylvia Hoeks, and Stephen Merchant also appear in the film.

The Girl in the Spider’s Web had its world premiere at the Rome Film Festival on October 24, 2018, and was released by Sony Pictures Releasing in Sweden on October 26, 2018, and in the United States on November 9, 2018. The film grossed over $34 million worldwide and received mixed reviews from critics, although Foy’s performance was praised.