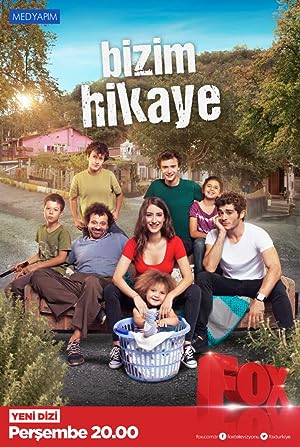 Bizim Hikaye (2017–2019)
120 min|Comedy, Drama, Romance|14 Sep 2017
6.4Rating: 6.4 / 10 from 2,829 users
This is the adaptation of the famous series Shameless. Filiz, a protagonist who has been struggling to survive in one of the poor neighborhoods of the city is the oldest child of the family who has looked after her five younger si...
Creator: Paul Abbott
Actors: Hazal Kaya, Burak Deniz, Reha Özcan

Bizim Hikaye Turkish drama series starring Hazal Kaya and Burak Deniz. An adaptation of the UK original, Shameless. been dubbed into Hindi as Our Story in India.

The adaptation of the famous series Shameless. Filiz is a protagonist who has been struggling to survive in one of the poor neighborhoods of the city. The eldest child of the family looked after her five younger siblings since her mother left them and her father was addicted to alcohol. One day a mysterious young man Barish enters her life and does his best to win the heart of Filiz and becomes a part of the family.

However, Filiz believes that there is no place for love in her life considering the difficult life she’s been leading and tries to ignore her feelings. The 6 siblings try to keep each other happy despite their father Fikri who devoted his life to just drinking and making money the easy way.