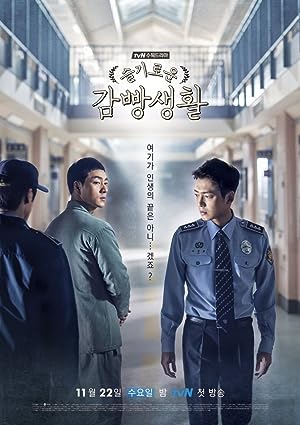 Seulgirowun Gamppangsaenghwal (2017–2018)
90 min|Comedy, Drama|22 Nov 2017
8.4Rating: 8.4 / 10 from 2,273 users
Baseball pitcher Kim Je-hyeok becomes a convict overnight after being sent to prison for defending his sister from a sexual assault, days before he was due to fly to the US to join the Boston Red Sox.
Actors: Hae-soo Park, Jung Kyung-ho, Krystal Jung

A captivating series revolving around the lives of convicts behind bars, their families, and duty officers working in correctional facilities. It focuses on the story of a superstar baseball pitcher, Kim Je-hyuk who is convicted of assault after he saves his sister from a sexual attack.

Baseball pitcher Kim Je-Hyeok becomes a convict overnight after being sent to prison for defending his sister from a sexual assault, days before he was due to fly to the US to join the Boston Red Sox.

If you had told me five days ago that I would be this enthralled about a series revolving around a Korean professional baseball player on the brink of being signed by an American Major League team being sent to prison for assaulting a sexual predator, I would not have believed it. Yes, I am a Korean drama fan and knew this series was well received in Korea but had dragged my heels on watching it. Who knew that this series would be chockful of so many funny, heartbreaking, happy, sad, and truly heart-tugging moments? Each of the main characters has a rich personality and you quickly find yourself emotionally wrapped up in their stories. Each episode is about 1.5 hours long with 16 episodes so there was plenty of time to flesh out the stories and characters, whether the prisoners or their guards. Of course, we know it is far from what goes on in a real prison but the humanity and character depicted in this show leave us with the hope that we will look beyond the prison jumpsuit or the guard uniform to find the human inside. Watch it, you won’t be disappointed!