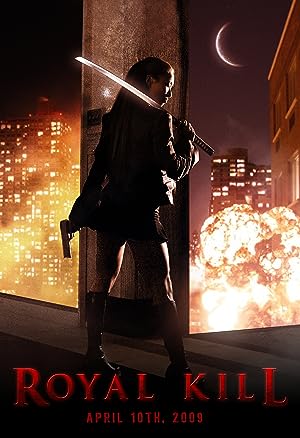 Royal Kill (2009)
90 min|Action, Thriller|13 Aug 2012
3.3Rating: 3.3 / 10 from 775 users
When a female assassin is sent to the US to kill the last living heir to the modern day Himalayan Kingdom, royal solider is also sent to protect her. When he is face to face with the assassin his duty to the Kingdom becomes compromis
Director: Bob Ahmed
Creator: Bob Ahmed
Actors: Alexander Wraith, Gail Kim, Lalaine

Royal Kill (AKA. Ninja’s Creed) is a 2009 American Action/Thriller Film,
Now in Hindi on ROSHIYA.me.

When a female assassin is sent to the US to kill the last living heir to the modern-day Himalayan Kingdom, a royal soldier is also sent to protect her. When he is face to face with the assassin his duty to the Kingdom becomes compromised. As they battle, secrets are uncovered and the line between good and evil is erased. Only one mission can be completed and only one person can survive.

I really like Gail Kim. I think she is one of the sexiest, as well as most technically talented, female pro-wrestlers of her generation. So, I have been waiting for this film for years (just remember that Pat Morita died in 2005 and do the math to realize how long its release has been delayed).

When I finally started watching it, I thought the only possible reason for the very bad reviews it got was its unfortunate retitling from “Royal Kill” to “Ninja’s Creed” on the DVD cover (it has nothing to do with ninjas). The first half of the movie plays like a low-budget but still slick variation on the “Terminator” myth: a mysterious noble warrior sent to protect the last hope of oppressed people from an unstoppable assassin whose only mission is to eliminate both.

Sure, they botched Gail Kim’s first action scene, the attack on Lalaine’s house, but her next fight, against Alexander Wraith and some security guards, is a nice set-piece, where she gets to use some of her trademark wrestling moves. And then…. the first big twist comes. The good thing about this twist is that you won’t see it coming. The bad things are that a) it cancels out the movie up to that point, b) it makes no sense. But even if you’re willing to go along with it, more similar twists soon follow until the film collapses completely into incoherence. If writer-director Babar Ahmed had focused more on trying to deliver a movie similar to the one suggested by the DVD cover, it probably would have turned out better than this overambitious mess. *1/2 out of 4.