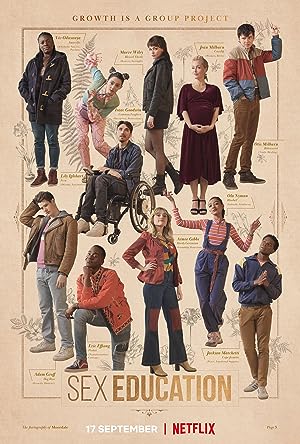 Sex Education 3 (सेक्स एजुकेशन TV Series 2021): It’s a new year, Otis is having casual sex, Eric and Adam are official, and Jean has a baby on the way. Meanwhile, new headteacher Hope tries to return Moordale to a pillar of excellence, Aimee discovers feminism, Jackson gets a crush and a lost voicemail still looms. Prepare for commitment animals, alien phenomena, vulva cupcakes, and much more of Madam Groff.

He also revealed in an interview from January 2021 that the next series will not start where the second series left off (e.g., from the cliffhanger, where Otis admitted his feelings for Maeve in a voicemail, which was deleted by Isaac.)

“There’s a bit of a time-jump since the season two cliffhanger,” Asa told The Guardian. “Otis is back at school but he’s got different things on his plate. He’s grown up a bit and become slightly sassier. It’s been fun to portray his newfound charisma. Don’t worry, though, he’s still tragically awkward too.”

He continued, “We got snapped by paparazzi while filming and people have been freaking out about Otis having a mustache. I can exclusively reveal it’s not real.

“It’s a stunt ‘tache and thankfully it doesn’t last the whole season. I don’t think anyone could bear looking at that thing for long.”

The main gang will once again take center stage (more about that later), and Netflix have also confirmed three new incredible characters. Jason Isaacs (aka Lucius Malfoy!) is playing “‘Peter Groff’, Mr. Groff’s more successful and not very modest older brother, who Mr. Groff (Alistair Petrie) has been staying within the wake of his separation from Mrs. Groff.”Gender nonconforming recording artist and songwriter, Dua Saleh, meanwhile, is joining in their acting debut, playing “‘Cal’, a nonbinary student at Moordale, who instantly clashes with Hope’s new vision for the school.”

Girl’s actress Jemima Kirke “will play former Moordale student and new headmistress ‘Hope’ who plans to turn Moordale back into the pillar of excellence it’s always been.”

Several first look images from the set of series three, taken by the show’s very own Tanya Reynolds (who plays Lily Iglehart), were released in December 2020. The pictures show Ncuti Gatwa (Eric) sitting on a sofa reading through a script, and Patricia Allison (Ola) sitting on a patch of grass in the sun. Lily dated each of the pictures and accompanied them with an adorable message to fans: “Hi I’m Tanya Reynolds and I play Lily in Sex Education. I like to take photographs while we are waiting on set. I wanted to share some with you from behind the scenes of season 3. More to come as the film develops… Be safe little aliens. Xxx.”