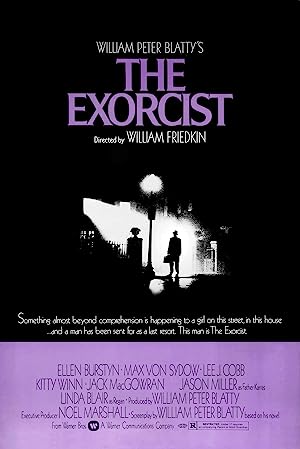 The Exorcist 1973 American supernatural horror film adapted by William Peter Blatty from his 1971 novel. The film is directed by William Friedkin and stars Ellen Burstyn, Linda Blair, Max von Sydow, and Jason Miller. It is the first film in the Exorcist series and follows the demonic possession of a 12-year-old girl and her mother’s attempt to rescue her through an exorcism conducted by two priests.

Most of the set burned down, and Blair and Burstyn suffered long-term injuries in accidents. Ultimately the film took twice as long to shoot as scheduled and cost more than twice its initial budget.

For many years after its release, it remained the top grosser in the supernatural horror and R-rated horror subcategories, as well. The film has had a significant influence on popular culture, and several publications have regarded it as one of the greatest horror films of all time. The English film critic Mark Kermode named it as his “favorite film of all time”. In 2010, the Library of Congress selected the film to be preserved as part of its National Film Registry as being “culturally, historically, or aesthetically significant”.