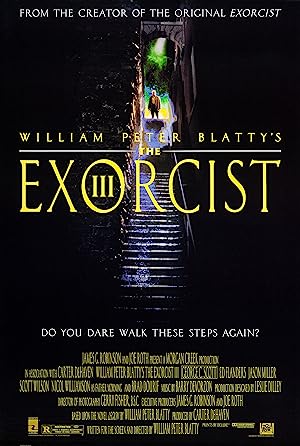 The Exorcist III (1990)
110 min|Drama, Horror, Mystery|17 Aug 1990
6.5Rating: 6.5 / 10 from 31,245 users
A police Lieutenant uncovers more than he bargained for as his investigation of a series of murders, which have all the hallmarks of the deceased Gemini serial killer, leads him to question the patients of a psychiatric ward.
Director: William Peter Blatty
Creator: William Peter Blatty
Actors: George C. Scott, Ed Flanders, Brad Dourif

Despite its title, The Exorcist III is set 17 years after the original film and ignores the events of Exorcist II: The Heretic. It follows a character from the first film, Lieutenant William F. Kinderman, who investigates a series of demonic murders in Georgetown that have the hallmarks of the Gemini, a deceased serial killer. Blatty based aspects of the Gemini Killer on the real-life Zodiac Killer, one of several serial killers who enjoyed the original Exorcist.

Blatty, who wrote the original Exorcist novel (1971) and the screenplay for its 1973 film adaptation, conceived The Exorcist III with Exorcist director William Friedkin attached to direct. When Friedkin left the project, Blatty adapted the script into a bestselling novel, Legion (1983); Morgan Creek Productions bought the film rights, with Blatty as director. To Blatty’s frustration, Morgan Creek demanded extensive last-minute changes, including the addition of an exorcism sequence for the climax. Though some of the original footage appears permanently lost, Scream Factory released a “director’s cut” closer to Blatty’s vision in 2016, with footage assembled from various sources.

Following the critical and commercial failure of Exorcist II: The Heretic, The Exorcist III received mixed reviews and made modest returns at the box office.